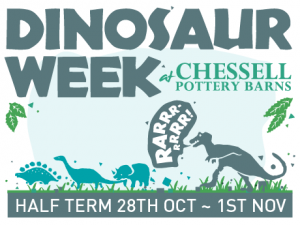 The Isle of Wight is known by fossil enthusiasts as Dinosaur Island, thanks to the wealth of prehistoric treasures found on its shores.  Once a perfect habitat for dinosaurs like the Neovenator and Iguanadon, the Isle of Wight is now one of the richest areas of fossilized remains in Europe.  The 11 mile stretch of coastline along the South of the Island, from Compton to Sandown, still yields numerous fossil finds and even dinosaur skeletons.

You can see huge casts of dinosaur footprints at low tide on the two beaches nearest Chessell Pottery – Compton Bay and Brook beach.  Or why not join a guided fossil walk with a local expert and see if you can find your own prehistoric souvenir? http://www.visitisleofwight.co.uk/dinosaur-island/fossil-hunts

In 2009, nine-year old Daisy Morris stumbled upon the remains of a new species of the flying reptile, pterosaur, on Atherfield beach.  After having her find confirmed by experts, the new species was named after its finder and location as ‘Vectidraco daisymorrisae’.  It now resides in London’s Natural History Museum, which has declared the Isle of Wight the “dinosaur capital of Great Britain”.

To celebrate the Island’s prehistoric heritage, together with the forthcoming release of the 3D film, Walking With Dinosaurs, this Autumn, we’re embracing all things dino-related at Chessell Pottery.  We’ve created some brand new dinosaur sponges to include more of the 25 species that are believed to have lived on the Isle of Wight.  And if you can identify a dinosaur from its shape, you’ll be in with a chance to win a whole load of prizes and up to £50 of pottery to decorate! 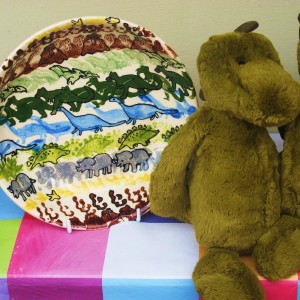 So come and join us this Half Term Holiday (28th October – 1st November) for Dinosaur Week at Chessell Pottery and paint your own dinosaur-themed pottery.  Why not cover a 1/2 pint Emma Bridgewater mug in a profusion of dino-prints or create your own prehistoric scene on a 8”5 plate?  Of course, we will also have all our usual sponges and popular autumn-themed designs of leaves, acorns, toadstools and woodland animals.  There’s something for everyone at Chessell Pottery this Autumn.

A New Design for Chessell! Over the winter, we have been busy making stocks of…

Chessell is now open every day for the school summer holidays from 9.30am - 5.30pm.…

Chessell Pottery burst back into life over Easter weekend, with visitors flocking to take advantage…

Our cafe is now closed for the winter but you can still have our delicious coffee and cakes at PO41, our coffee house in Yarmouth which is open 7 days a week.

I am the footer call-to-action block, here you can add some relevant/important information about your company or product. I can be disabled in the theme options.
Get In Touch
Copyright Your Business LLC. 2022 - All Rights Reserved
Back To Top
×